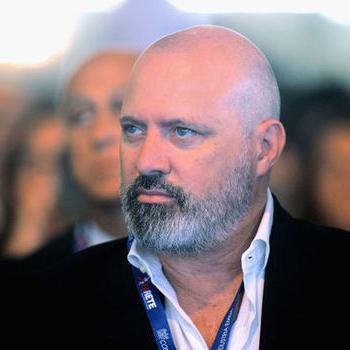 Stefano Bonaccini was born in Modena in 1967; he is married and has two daughters.
His career as public administrator began in 1990 when he became a young Councillor with responsibility for Youth Policy, Culture, Sports and Free Time in Campogalliano town, near Modena.
For the period 1993 - 1995 he was appointed Provincial Secretary of the Youth Left.
In 1995 he was elected Secretary of PDS Party in Modena city.
For the mandate 1999 - 2006 he was Councillor with responsibility for Public Works and Historical Heritage in Modena city.
In 2007 he was elected first Provincial Secretary of the Democratic Party of Modena and at the local elections of 2009 he was elected Councilman in Modena city.
In the same year, after the success of the primaries, he became Secretary of Democratic Party of Emilia-Romagna Region, charge which he maintained until May 2015.
In March 2010 he was elected regional Councillor of Emilia-Romagna Region.
After the proclamation of Matteo Renzi as National Secretary of the Democratic Party, on December 2013 Stefano Bonaccini was elected, by Matteo Renzi, Executive in charge of Local Authorities of National Secretariat.
On 23rd November 2014, he was elected President of the Regional Council of Emilia-Romagna - obtaining 49% of the votes - and on 29th December 2014 he officially joined the full exercise of his functions.
At the same time, he was appointed Deputy Commissioner for the implementation of interventions for reconstruction, assistance to the population and the economic recovery of the areas affected by the Italian earthquakes of 20th and 29th May 2012.
He is President of the National Conference of Regions and Autonomous Provinces since 17th December 2015.
He has been elected President of AICCRE (Italian Association of Municipalities, Provinces, Regions and other local communities) on 18th March 2016. He is President of CEMR since December 2016.