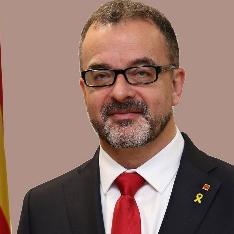 Minister of External Affairs of Region of Catalonia

Alfred Bosch is a graduate in History at the Autonomous University of Barcelona (UAB) and won a PhD in History with a dissertation about the African National Congress and the Phoenix of opposition movements, focusing on Nelson Mandela and the civil rights movement. He has taught in universities and other centres in Catalonia and all over of the world: University Pompeu Fabra (UPF), Autonomous University of Barcelona (UAB), University Rovira and Virgili (URV), CIDOB, University of Chicago, University of London, University of Ibadan (Nigeria), University of Wiwatersrand (South Africa) and the Hood College (Washington). He also chaired the Centre for African Studies (1991-1999) and got deeply involved in the organisation of the 1992 Barcelona Olympic Games, holding several responsibilities in the city candidacy prior to its election as Olympic venue and, at a later stage, at the Barcelona Olympic Committee (COOB).  A columnist for countless media, he has also been a freelance correspondent in some countries and areas in conflict such as South Africa, Brazil, Lebanon, Syria, Israel, Jordan, Mexico, Panama, Indochina, Sri Lanka, India, the Philippines,  Vietnam, the West Bank, Egypt, Iran or Bosnia. As a writer he has published 17 works, altogether novels and essays, with contents revolving around the African context, the present predicament of Europe and Catalonia and around Catalonia’s history.  As for the institutional field, he has been councillor and president of the ERC municipal group to the Barcelona City Council (2015-2018), vice-president at the Metropolitan Area of Barcelona, member at the Spanish Congress of Deputies, and president of the ERC parliamentary group to the Spanish Congress of Deputies (2011-2014).