A Stronger, cohesive leadership comes out of our World Council at the UCLG World Summit

The last day of the World Summit was key for the future of our movement. UCLG President, Mohamed Boudra, Mayor of Al Hoceima announced a truly collegial Presidency in which there will be special portfolios including special envoys.

President of UCLG Mohamed Boudra thanked all of the Network for his appointment, and called to reinforce our union to be a common voice towards the international system.

“We are ready to carry the message: let’s y the world's agendas together! I call for your energy, your determination, your commitment to the transformation of our societies, the protection of our planet and the well-being of all.” Mohamed Boudra, President of UCLG.

The Durban Political Declaration was adopted by the local and regional delegates gathered within the Summit. The Durban Political Declaration, built on the work made of the constituency, provides a strong vision of the future of the international municipal movement for the 21st century and builds on the municipalist agenda of the world organization to go into the next decade.

The Durban Political Declaration addresses the renewal of local democracy, our commitments towards being equality-driven municipal movement building on the delivery of public services, and securing that the fourth industrial revolution services our communities and not just for those who have everything.

Peacebuilding, resilience, and a commitment to localization are all part of the municipalist patrimony that needs to be fostered and protected as we enter the next decade

“The transformation that will need to be brought about in our development model will only be possible if it responds to the dreams and expectations of citizens and communities and if collective responsibility is taken to adjust and make compromises on a fair, equal and sustainable basis”

Our constituency in the implementation decade: The gathering of the World Assembly of Local and Regional Governments

The World Assembly of Local and Regional Governments, our constituency’s political mechanism to the international arena, formally met during the morning of our last day of the Summit, gathering hundreds of local leaders, civil society partners and national governments. The session of the World Assembly received the political inputs from the Town Hall and Assembly tracks, which fed the Outcome Document of the summit.

The Outcome Document of the World Assembly envisions a renewed and stronger world assembly, in which the shared commitments and visions of the constituency to leave no one and no place behind are secured, and that accelerate actions to achieve sustainability, and rethinks its partnerships among all stakeholders and civil society.

The World Assembly formally received the recommendations of the TownHall and Assembly tracks of the World Summit, as well as the outcome documents of the 10 Special Sessions of the Local4Action Track, on Biodiversity, Ecology, Resilience, Culture, Housing, Transparency, Migration, Local Finances, Gender Equality, Mobility.

The Outcome Document released by the World Assembly encompasses the compendium of policy recommendations brought by the TownHall and Assembly Tracks, including promoting accessible and inclusive policies, promoting and mainstreaming gender equality through both men and women-led initiatives, recognizing everyone’s right to the city, indispensable in providing access to opportunities for all, and to address informalities by treating it not as a problem, but as a solution to a problem.

Peace, Solidarity and intergenerational dialogues at the heart of the discussions

The final Plenary of the UCLG World Summit took had peace, solidarity and inter-generational dialogue  at its core. The Peace Prize Ceremony took place during the day, awarding the city of Arsal.

Members and Partners continued their exchanges at the Local4Action Hub and in the Local4Action Track, with international peer reviews, governance of public spaces, regional strategies and leadership competences to achieve the 2030 Agenda.

Passing the torch for localization

The Closing Ceremony of the UCLG world summit gathered the newly appointed President of UCLG Mohamed Boudra, who shared his insights on the future of the movement and his election, and thanked the outgoing leadership and the work of the Organization.

President Mpho Parks Tau bid his farewell as President of UCLG, wishing that our World Organization grows to higher peaks during the next three years, and praising the consensus-building of our movement, which makes us resilient and stronger. 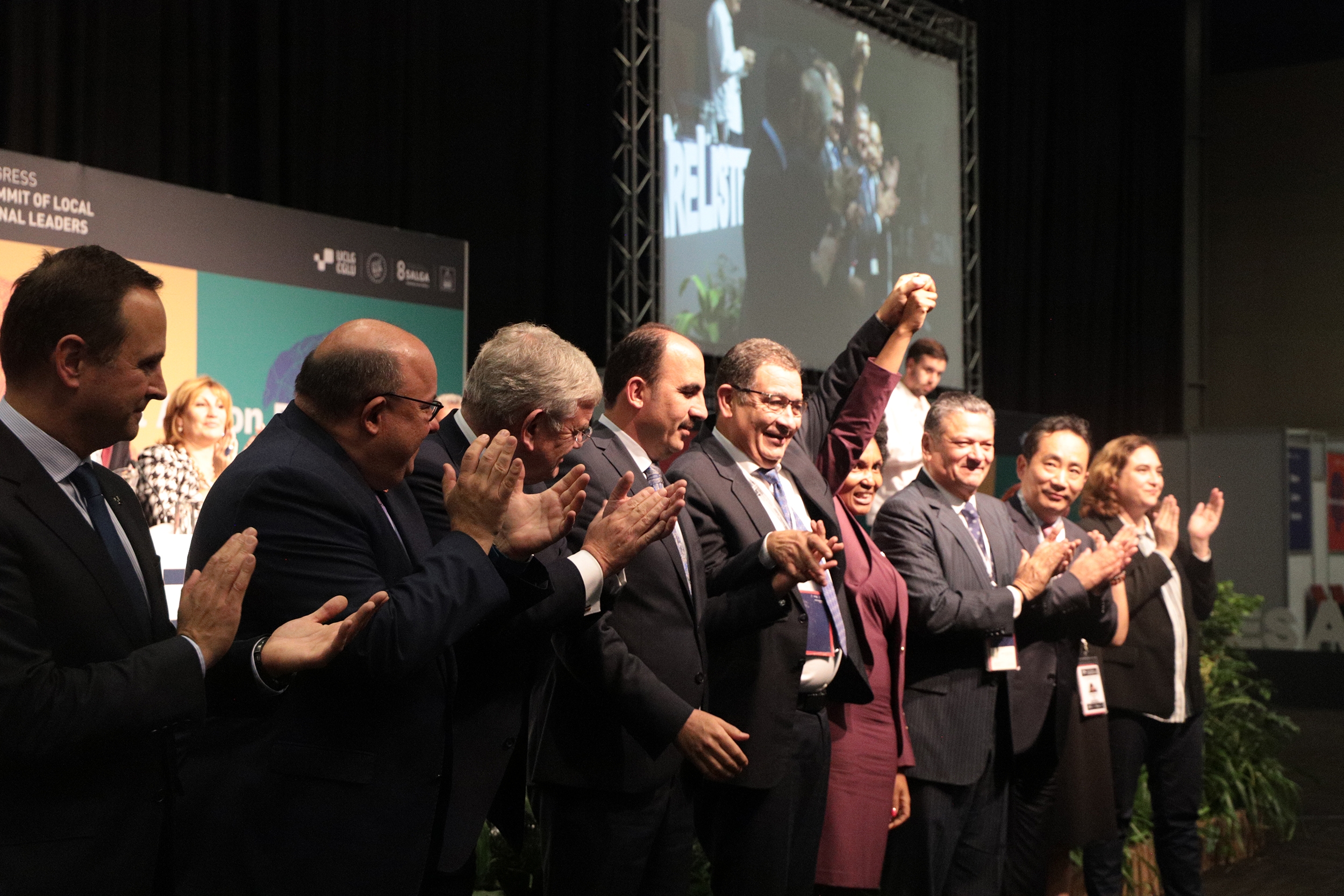